The original version of this article was published on 10/21/19 at https://www.uhn.ca/corporate/News

Theresa (Terie) Elliott had started wondering after years of chronic pain if she should just ask to have her foot amputated.

Seven years ago, Terie had injured herself leaving work, twisting her left foot as she descended some steps.

“I shook it off, but when I got home my foot was black and swollen when I took off my sock,” she recalls. “I figured it must be pretty serious.”

When she went to her local hospital’s Emergency Department, the doctor’s told her it was likely a sprain and to carry on as usual.

Terie spent all day on her feet as a cook at a Mennonite restaurant in her community. Her family doctor recommended she stay home for a week. But the pain that had developed since her injury persisted, sabotaging her attempt to return to work.

Weeks went by, and the pain only got worse.

“Burning, cramping, pins & needles – it felt like my foot was asleep all the time,” Terie describes. “It was cold to the touch and very swollen.”

Terie’s foot was still black by the end of November. She knew she was well past the healing time of a sprain.

The Worker Safety Insurance Board (WSIB) referred Terie because her injury was the result of a workplace accident. She saw orthopedic surgeon Dr. Johnny Lau at Toronto Western Hospital‘s (TW) Altum Health. Altum Health is a division of UHN with 11 locations across the province, offering specialty treatment covered by third party payor services.

Results from a requested CT scan came back on Christmas Day. Her foot had actually been broken – a misdiagnosis that would change her life.

It was by then too late to immobilize or perform surgery on her foot. Dr. Lau could only refer her to Dr. Anuj Bhatia, Clinical Director of TW’s Interventional Pain Service. Dr. Bhatia is also the Medical Director for Anesthesia and Pain Management at Altum Health.

Treatment began with trying medication to relieve her foot pain.

“The medication would help at first, but I’d eventually need to increase the dose or try something new,” Terie says. “We also tried injections of medications but those would wear off after a month.

“Nothing was helping and I was really concerned about long-term side effects.”

A misstep on a flight of stairs while leaving work left Terie Elliot in pain for the next seven years. Just when she’d given up on finding relief, Health Canada approved a battery-free peripheral nerve stimulator and she became the first patient in Canada to get one.

“I told my boyfriend he should find someone else”

The following years were bleak for Terie. She had no choice but to quit the job she loved and retrain for a new career. She sold her motorcycle, a gift from her boyfriend, as operating the vehicle only made her pain worse. Terie couldn’t join him to go riding, either.

The chronic pain made her constantly angry and she lost interest in many activities.

“I told my boyfriend he should find someone else, someone he could do things with,” Terie admits. “It wasn’t fair for him.

“Even when we did go out, all I could think about was going home to take my medicine and go to bed.”

Then came the thoughts about amputation.

“The pain was so brutal, I didn’t have any kind of life,” she says.

Thankfully, Dr. Bhatia had something new to suggest. A peripheral nerve stimulator (PNS) – a device where electrodes are implanted into the damaged nerves and send electrical pulses to the brain, altering a patient’s perception of pain. Though available for years to help patients with chronic pain in the back, a new version of the device that didn’t require a battery to be implanted along with it had recently been approved by Health Canada.

“It’s a great development which allows us to offer this treatment to more patients,” Dr. Bhatia explains. “We no longer need to find a place in the body to implant the battery, which not only makes the surgery less invasive, but also reduces the risk of infection as there’s no need to replace the battery every few years.”

In August, Terie became the first patient in Canada to receive the battery-free peripheral nerve stimulator.

The electrode threaded into her foot via a thin needle using X-ray and ultrasound guidance. Through nanotechnology, a chip in the electrode communicates with an external transmitter – similar to a cell phone communicating with a nearby cell tower – to regulate the strength of the electrical pulses delivered by the electrode. The transmitter is placed above the electrode to work, but can be worn easily in a sleeve or strapped to the limb.

Following surgery, clinicians such as registered nurse Victoria Bains, program the transmitter with three programs on an iPad that regulate the intensity of the electrical pulses that patients can choose from.

Terie’s life changed immediately after surgery when the electrode turned on.

“My foot was warm within five minutes,” she says. “I even let my boyfriend touch my foot so he could feel how warm it was.”

Weeks after surgery she continues to do well and is slowly coming off her pain medication.

“The pain isn’t gone but it’s completely different, I tolerate it much better,” she says.

“This device saved my life, the pain made me such an angry person,” she says emotionally.

“My boyfriend agrees that I’m back to the person I was before the accident. We’re both so grateful to the team for giving me my life back.” 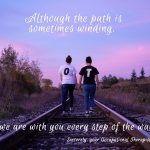 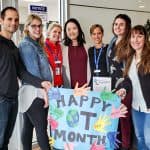